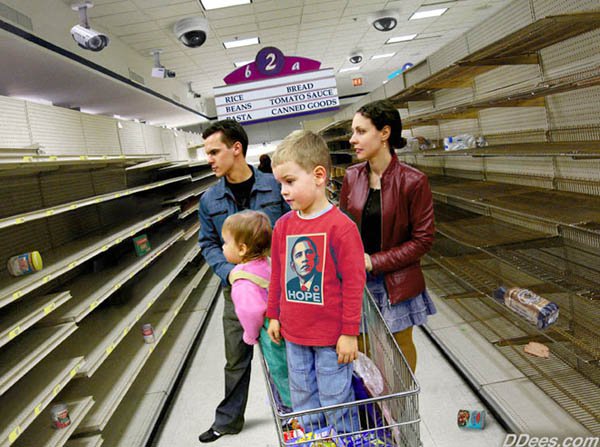 You must prepare for martial law and food crisis survival because it’s not just talk that the President would declare Marshall Law in the U.S.

that would create a food crisis and affect your basic survival.

The President inherited a tremendous amount of power, including the Patriot Act and Martial Law.

Marshall Law has become a real and present danger to the American people, which is why we’re hearing about it more frequently.

At the President’s discretion, it can be used for a certain area only or for the entire nation.

The time period is indefinite and all civil liberties are usually suspended.

With our current laws, the President has the power to enact this nightmare on our people.

A year ago, while I was still naive, I thought it was unfathomable for the U.S. to turn against it’s people, even though there have been incidents throughout our history.

A retired military friend told me very matter-of-fact that it could happen again.

I have since learned, there are now foreign troops here in America training for this very purpose.

The theory is that these foreign troops posing as Americans would be more likely to murder you, me and our neighbors for a morsel of food.

Imagine the U.S. involved in another Civil War (which is what Marshall Law will cause) whereby home invasions result in the worst military war crimes, such as looting, pillaging…, is now part of foreign troops basic training.

View Foreign Troops In The U.S.

I have also learned that FEMA is stockpiling tens of thousands of disposable coffins in Georgia, and setting up temporary morgues across the country in preparation for Marshall Law.

Homeland Security Needs No Probable Cause During Martial Law

Department Of Homeland Security (DHS) police have already been given totalitarian authority to kick in doors of private citizens, and brutally beat them among other things, for challenging their authority in the streets or in their own homes; and local police have the same mandate.

The possibilities of what can be done to jeopardize our basic survival under the Patriot Act/Marshall Law are endless.

Forget about the Constitution, because it’s just a piece of paper that the President likes to reference.

Here are some likely scenarios that would prompt the President to declare Marshall Law:

The government will need extra food to feed foreign troops.

You’re probably wondering why would Martial Law ever be needed in a food crisis?

If what happened in Venezuela hasn’t convinced you, then imagine being arrested, imprisoned, your food confiscated and crops destroyed.

There is a new law up for approval that would criminalize citizens who attempt to grow their own food during a food crisis.

This is terrifying to imagine, but it happened in Venezuela and could happen here.

Under Marshall Law, food and water security as we know it is gone!

The control of food and water will be in the hands of the State.

The bottom line, buying out farms, hoarding grain, heavy taxation of livestock and crops, micro-management of planting, even for private use, are all earmarks of Martial Law.

The rural and urban poor, illegal immigrants and blacks who refuse to work, have become the working man’s burden, and everyone’s job will be the concern of the State.

States are already flexing their muscles to punish by monitoring food stamp fraud and illegal purchases, limiting benefits unless you find employment within a few months, etc. (you don’t work, you don’t eat).

How To Prepare For Martial Law And Emergency Survival?

Here’s some sound advice for how to prepare for the coming Martial Law gleaned from “survival preparedness” experts with some suggestions from myself:

1. For those who have lost their homes, in order to avoid FEMA camp incarcerations and chip-identification implants ensuring emergency rations, low cost trailer homes or vardo wagons are a sure bet against State intervention.

2. For those still living within your own four walls, storage of rice and beans (see dry canning in Mason jars video below), water, along with alternative sources of fuel for cooking and heating, will provide a shield from being at the mercy of Martial Law troops.

3. Alternative means of communication, besides land lines, IPhones and emails, are highly recommended, such as a CB radio and walkie talkies.

4. If you must travel, divide your journey between two parties in two separate vehicles, taking two different routes to your desired destination. If one party falls into a dragnet, the other party can provide rescue.

Don’t be caught without an alternative housing plan (if you have lost your home), emergency food supplies, clean drinking water storage, cash reserves, barter items… for what many are predicting as a Police State also known as Martial Law.

Medical Hemp: Who Wants Their Own CBD Website? | RuralMoney.com
The Overlooked Way To Make Money Online In...
Real Money Moves For Your Positive Cash Flow
Rural Real Money Moves To Keep Your Cash Fl...
A Group Home Is The #1 Passive Income To Replace Your Day Job
If you’re thinking about quitting your day jo...
Share this...