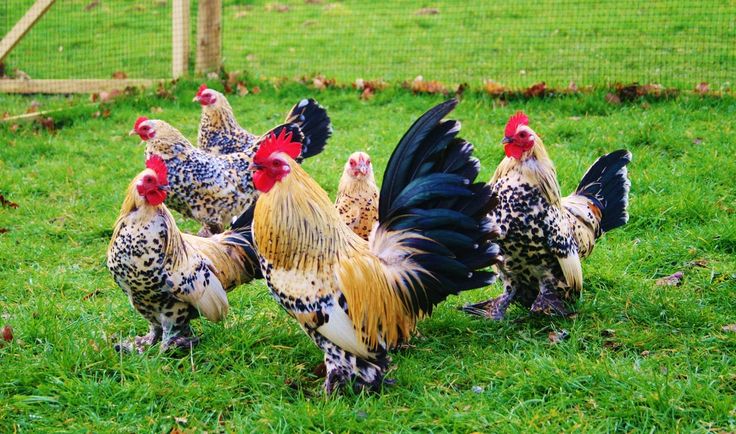 How To Identify American And European Rare Breed Chickens

Which Beautiful  Rare Breed Chickens Are Best For You?

Learn how to identify American and European rare breed chickens in modern agriculture that has a very small breeding population.

These beautiful birds were first recognized in America in 1898.

Very gentle and easy to handle. Hardy in cold weather, excellent setters, lay and hatch well, and are very eye-appealing with their sharp contrast of color.

The buff is the newest variety to be recognized in the U.S. and because of this, is more difficult to find. The beautiful golden buff bodies with black tails and laced hackles make them an extremely attractive bird.

It is one of the oldest and most established of the varieties. Its color pattern is known as Silver Penciled, which consists of a lustrous greenish-black base color with a narrow edging of silvery white around the neck, saddle, and tail with feathers that shine in the sunlight.

Originally known as “Seral-Taook” or in English, “Fowl of the Sultan”. This bird originated in the U.S. but was bred from its standard size counterpart from Turkey. This breed has a crest, beard and muff, vulture hocks, feathered shanks, and 5 toes.

Both the male and the female are a pure, soft white with bright red combs and wattles. Very pretty birds.

A very soft golden color throughout. One of the oldest and most established varieties of cochins.

The base color is black with a nice green sheen to it. On the male and female, the neck and upper breast are white with narrow dark stripes running all the way through each feather to the top.

They have coal black plumage with greenish sheen with a bright red comb and wattles.

Feathers are a lustrous greenish-black base tipped in white.

Parallel bars of alternate dark and light colors throughout the length of each feather.

Both the male and female have an even shade of deep lustrous red.

Vary from a bluish-white to a beautiful black-laced dark blue.

Each feather is rich, golden-bay laced with lustrous greenish-black, creating a broad oval with a golden-bay center. Extremely eye catching.

This is truly a unique bird. Unlike all other chickens.

Unlike all other chickens, the feathers on the frizzle curve outward and forward giving it the appearance of having walked through a windstorm backwards.

These beautiful birds came to Europe from Japan in the 17th century. Each feather is tipped in white, vulture hocks, heavy leg feathering, and a wide set tail. Bearded and unbearded varieties. Unique and unsurpassed.

Their reddish-bay feathers are tipped in white.

The base color is a pale blue rather than red.

White plumage and mulberry colored comb, face, and wattles. The ear lobes are a light blue turquoise, and the skin is a dark bluish/black. A table delicacy in Asia.

All the qualities of the other silkies.

Black hair-like feathers with a mulberry colored comb, face, and wattles. The ear lobes are a light blue turquoise, and the skin is a dark bluish/black.

They have the same black skin of the other silkie varieties and mulberry comb, face, and wattles. The ear lobes are a light blue turquoise.

These bantams carry their tails upward and higher than the head. The wings angle down and back along the sides. Good layers, nice for show, and very popular.

White feathers over their entire body, red comb and face.

Beautiful buff color takes the place of the white feathers.

Stand Your Ground Rural Homesteaders Alone: I Shall Not Be Moved
Don’t Rally To Hate For The Elected This i...
20 Best Ways To Make Money Helping Local Businesses Online/Off
You can make money helping local businesses w...
Find Free Seeds For Your Garden In Your Prepper Pantry
An Unlikely Place To Find Garden Seeds—Free...
Share this...