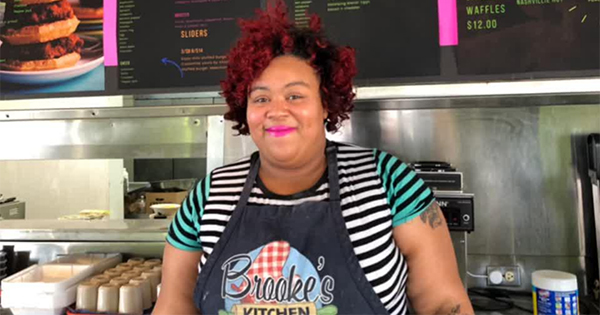 She’s Had Some Ups And Downs, But More Than This—She’s Doing Her Restaurant Her Way

She had a dream; and she was determined to achieve it.

And, and her customers have tons of positive feedback!

“I was going through a struggle,” Coleman told local media Dayton.com. “One night I looked at my family and decided I was never going to be in that situation again. I knew if I worked hard, I would never have to go back to that shelter.”

After receiving the necessary training, she started a small catering operation where she became known as “Chef B”.

After some time, Coleman grabbed the opportunity to open her own restaurant.

It was appropriately named Stuffed Enuff since most items on the menu can be stuffed with a variety of ingredients.

They have stuffed meat, stuffed rolls, as well as stuffed burgers that customers can customize with their choice of stuffing.

Moreover, the restaurant also offers chicken wings with a choice of 8 dips.

Every Sunday, they also feature a Soul Food menu that’s available in an eat-all-you-can buffet or for take-out.

Their patrons particularly liked the variety of excellent food and great customer service.

“I knew I wanted to do something different from what any other restaurant was doing,” Coleman said.

Watch the Video:  Once Homeless, This Single Mom Now Owns Her Own Restaurant in Ohio

Broadband Providers In Rural Areas Are Giving The Hook Up
The Advantages Of Broadband In Rural Areas ...
Student Loan Discharge Forms: How To Choose The Right One
Choosing the Right Student Loan Discharge a...
The Purpose Of U.S. Republic Legislators Is To Control Rural Poor
Legislators Of Rural Poverty Conservative le...
Job Corps Careers For Young Adults Begin Here
medianet_width = "728"; medianet_hei...
Emergency Power Outage: How To Survive Crisis Off The Grid
What To Do Before An Emergency Power Outage...
homeless single mom became a restaurant entrepreneur 1 Comment
Share