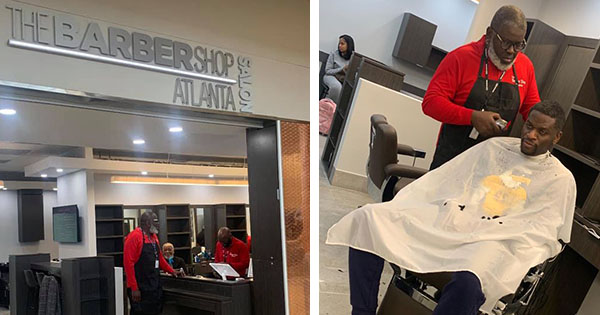 The airport, which serves more than 100 million passengers every year, has been attempting to open a Black-owned hair salon or barbershop since 2009.

The plan, however, never seemed to work out for other operators until Gilbert’s shop was chosen from four other applicants who applied in 2014.

“I’m just glad to be open,” Gilbert told the Atlanta Journal Constitution. “We had to go through a lot.”

But after more than 5 years of complicated planning and construction, The Barber Shop Atlanta has finally opened.

It is located in the North Terminal Atrium, Level 2 near the TGI Fridays restaurant.

The shop is open 17 hours a day, and offers various services such as men’s and women’s haircuts, shaves, styling, perms, facials as well as massages.

And Gilbert is not new to the game.

His first barbershop, located at North Dekalb Mall in Decatur, Georgia, has been open for more than 10 years.