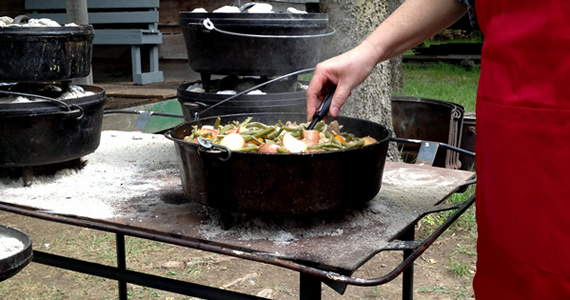 Rural Survival: Cooking Without A Kitchen For Enjoyable Eating

There are many other ways you can cook without a kitchen and prepare a delicious meal, which is a technique that works really well.

Cooking Without A Kitchen Can Be A Pleasure

There are many other ways you can cook a delicious meal, without a kitchen, which is a technique that’s relatively simple, and works really well.

Your first thought may be, cooking on a barbecue grill, but that’s just one way.

The most important thing, you’ll need to cook without a kitchen, is a wood fire.

Then, food can be cooked over an open fire pit, in the ground, in a wood-fired oven, or Swedish Fire Log Stove.

Food cooked with direct fire, instead of coal briquettes, taste so much better.

When cooking without a kitchen, you don’t have to wait until the coals are hot; you can start cooking immediately, on an open fire, to fry, boil and bake.

Don’t Be Afraid Of The Fire Cooking Without A Kitchen

When cooking on an open fire, I recommend using cast iron cookware.

The landscape can also be used as a cooking device, by using a fire pit oven, and here is how to do it.

First, dig a hole in the ground, in an area with good drainage.

Make sure the pit is big enough for the meat, or cast iron pot that you’re using.

Line the pit with large stones such as granite, which will not explode when heated.

Gather some wood, and kindling, and start a fire on top of the stones, in the pit.

Light another fire alongside the pit, with smaller stones around it.

After a couple of hours, extinguish the pit fire, brush down the stones, and put in your choice of meat, or a cast iron pot full of vegetables.

Cover the pot with some of the smaller stones, that have been heated on the second fire.

To finish off, fill the pit with soil and turf, then leave the venison, lamb, etc. to cook for three to five hours.

Another technique to cook without a kitchen is: wrapping fish in leaves or pine needles, and baking in a covered clay dish.

Cooking without a kitchen may seem like a lot of effort, for just one meal, but, if push come to shove and you need an alternative cooking method, the process can be just as enjoyable as “eating.”

If you love being outdoors, and cooking outdoors, cooking without a kitchen will be a pleasure, and not a chore, of survival, trial and error.

RuralMoney.com | Work From Home Tips – Rural Money Profit Is Your Payday™ – If you like it, share it!

Meet Your Strawman Your Birth Certificate Is Worth Millions
You Were Rich From The Day You Were Born An...
Hemp: Shocking Truth Behind The Most Amazing Pain-Fighter Ever
So Effective The Government Patented It:  R...
Student Loan Discharge Forms: How To Choose The Right One
Choosing the Right Student Loan Discharge a...
Share this...