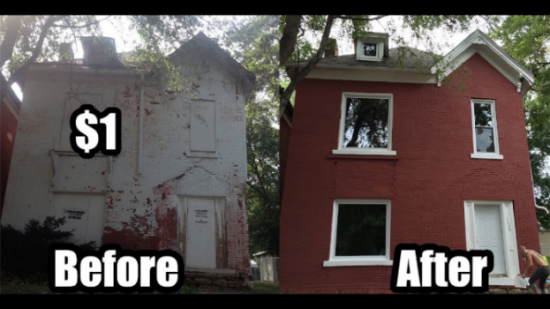 Dollar Homes are single-family homes that are acquired by the Federal Housing Administration, which is part of HUD as a result of foreclosure actions.

Single-family properties are made available through the program whenever FHA is unable to sell the homes for six months.

By selling vacant homes for $1 after six months on the market, HUD makes it possible for communities to fix up the homes, and put them to good use at a considerable savings.

The newly occupied homes can then act as catalysts for neighborhood revitalization, attracting new residents and businesses to an area.

Local governments can partner with local nonprofit home ownership and land trust organizations, or tap into existing local programs to resell the homes to low-to-moderate income residents of the community.

Maybe the following examples will make you wish you had a urban homestead of your own:

$1 HUD Home Buffalo, New York: “The Urban Homestead Program that is offered by the City of Buffalo enables qualified buyers to purchase a home that has been deemed ‘homestead eligible’ for $1.00 and there are plenty of properties left.

There are three main requirements when purchasing a homestead property; the owner must fix all code violations within 18 months, have immediate access to at least $5,000, and live there for at least three years.

You also have to cover the closing costs of the purchase.”

$1 HUD Home Gary, Indiana: “Officials say that a third of the houses in Gary are unoccupied, hollowed dwellings spread across a city that, like other former industrial powerhouses [like Baltimore, Maryland] has lost more than half its population in the last half-century.

While some of those homes will be demolished, Gary is exploring a more affordable way to lift its haggard tax base and reduce the excess of empty structures [and] sell them for $1.”

$1 HUD Home South Bend, Indiana: “How could you refuse this offer?

The city of South Bend, Indiana wants to give this handsome circa 1851 Italianate farmhouse away to anyone willing to properly restore it.

Aside from the boarded up windows (the boards are painted to look like real windows), the place is in pretty good shape, with a completely restored exterior, new roof, and all new HVAC, plumbing and electrical systems.

All you’ll need to do is restore the gutted (but clean as can be) interior.”

$1 HUD Home Detroit, Michigan: “Now that the motor city has effectively run out of gas and declared bankruptcy, some rather eye-popping deals are presenting themselves to first-time home buyers who appreciate the challenge of a fixer-upper.

Hundreds of Detroit homes currently listed on Zillow have asking price below $5,000, with at least one seller so desperate as to offer his house for just $1, ABC News reported.”

First Case In Point: Many years ago, I was an avid fan of HGTV. I remember watching P. Allen Smith’s video clip of how he purchased the now “Garden Home,” a 1904 Colonial Revival cottage located in the historic Quapaw Quarter of Little Rock, Arkansas.

He purchased the house for $1 and relocated it to a 15,000-square-foot vacant lot that he owned.

The bargain price was contingent on Smith receiving permission from the local historical commission to move the home from its original site, and restore it elsewhere in the city.

Today, the Garden Home is surrounded by a series of beautiful garden rooms designed by Smith; and he has built a gardening/design/media empire around that $1 humble home.

It’s also worth pointing out that when changes occur in the economy like in 2007, the social impact will be more devastating.

Suddenly, people won’t have the resources they thought they had to buy food and pay bills, and you won’t be very happy about it.

That’s why it’s worth thinking out-of-the-box (as I do), including about where and how you can get a cheap urban homestead and SAVE THOUSANDS OF DOLLARS.

My own preference was to relocate to a rural area almost 15 years ago; so I could grow my own food… cut my own firewood…, and even raise a few goats.

It’s not easy homesteading, but it’s fun, and I have some protection from the pending credit and economic crash that will be excruciatingly painful when it does happen, and you’re not prepared.

Not only am I much more independent and safe, I also SAVE THOUSANDS OF DOLLARS.

Second Case In Point: The millionaire Bill Bonner bought a beautiful family house in a bad neighborhood in Baltimore, Maryland, for $27,000, with owner financing.

Third Case In Point: Billionaire Warren Buffett purchased a five-bedroom stucco house in Omaha, where he still lives, for $31,500.

Final Case In Point: Many years ago, someone shared with me inside information about making a small investment in the Atlanta housing boom that made me 6 figures in less than 5 years, with a house that I lived in.

Read my story “How I Turned A Small Investment Into Six Figures.”

Wealthy people aren’t interested in passing up ‘other peoples money’, free government money, paying too much, or giving money away, therefore, cash-strapped homesteaders shouldn’t either.

The bottom line is this: The longer you wait to purchase a homestead, the more expensive it will become.

With the $1 HUD home, you can buy now, live in it while you fix it up with all the money you can spare, blood, sweat and tears for three years; then rent it out as passive income property, but hold it, because houses won’t be that cheap again!

Resource:  To find out if properties are available for sale in your community, visit HUD Homes and click on your state.

Are You A Cash-Strapped And Want To Start A Homestead As A Business?

As a single woman who’s been earning money online as a work-at-home entrepreneur since 1998, I’m here to teach you how! Believe me, I’ve been cash-strapped! In 2009, I was living in a 350 sf 1-bedroom apartment (box) where I cleared about $68,000 worth of debt. I became debt-free for the first time in my life! Today, I’m still beating all odds by homesteading as a business, and living the rural lifestyle! You’re in the right place to get the information, resources and tools you need to SAVE THOUSANDS of dollars, start a homestead as a business and make rural money at home / online. Click the link to take the first step by getting your own website.